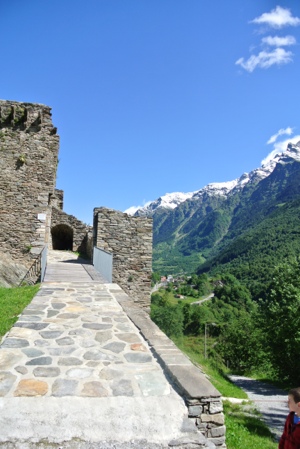 A ruined castle on the way to Como.

Today was the start of our European road trip. We started the day getting the Crichton girls off on their school camp, They’re off on a three day ride in the Alps, sleeping in farmhouse barns. Then we had to roll start the Crichton’s Campervan – flat battery. And then we were off, heading south to Switzerland.

Last year I drove the Icefields Parkway between Edmonton and Calgary, and around every turn pulled out the camera to take a photo of new scenery, that seemed more stunning than what had come before. Today was a similar experience.

We did a long and slow trawl down the mountains, dropping from 1600m above sea level to just 200m at Lake Como. We were waved through the border post into Italy, no passports required. First stop over the border for lunch was Cernobbio. Food in Italy is astonishingly cheap, and from what we’ve seen of liquor prices, that’s cheaper again. So we had a delicious lunch of roast chicken, chips and gelato on the shores of Lake Como for the princely sum of 15 Euro for the five of us.

Then we headed north to Domaso where we’re spending the night. Um, Italian roads are very narrow and chaotic, and though the trip was only 50km it was hectic and stressful. (Stunning scenery though). We made it to Domaso and checked in to a restored 17th Century Villa, three bedroom unit complete with spa and views over the lakes to the mountains.

We had one “adventure” which I’m sure Anne will elaborate on. We took the rather large Campervan up an exceedingly narrow, cobbled Italian laneway. Suffice to say it was too large and I had to back the vehicle all the way to where we’d come from, to the bemusement of locals. In future I will be less hard on some of the ridiculous things tourists get up to on the Blackall Range.

Dinner. We’ll we’re in Italy. How could we go past ridiculously cheap pizza on the shores of Lake Como with Euro 2012, complete with Italian commentary, in the background? 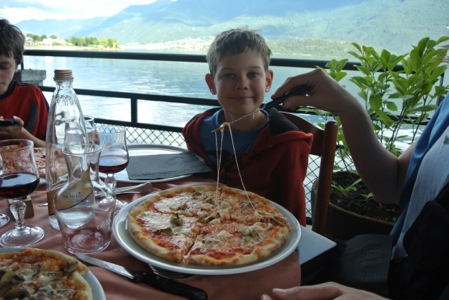 This entry was posted on June 14, 2012 by anneegrant. It was filed under Switzerland & Europe .